B and O Railroad Museum Christmas 2009 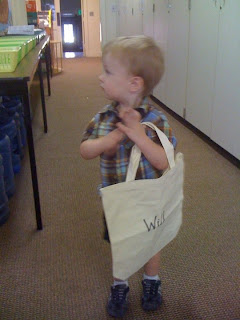 How can it be that Will is old enough to be going to nursery school?!? I am so proud of him for going right into the classroom, sitting at the table and starting coloring without as much as a wimper. Paul got to take him on his first day and here are the photos that he snapped. I was at work all day and a nervous wreck for most of the morning. My poor kindergartners did not get my full attention until Paul texted me that they were safely at home and Will was napping. I didn't realize how nervous I was going to be on his first day. 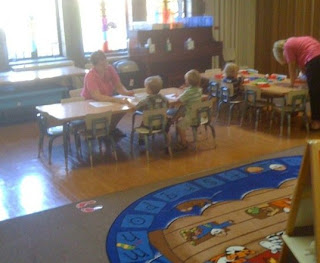 As I am writing this, I am officially seven months pregnant. I can remember being pregnant with Will. I remember bringing him home to Sonie Lee and Al's and bringing him home to our first house when he was four months old. I remember him rolling over and sitting up. I recall his first tooth and his first steps. After that, it all becomes a blur!! What happened to his second year of life. It went by way to fast....I'm hoping that his third year will be better documented through this blog. Even though, I have taken a few weeks off to get me ready for school and Will back into rotation of daycare at all the family members' houses (Thank God for family!!)

Today, I took him for his second day of school. He did just as well. Not even a look back to see where I was or what I was doing. He was excited to see his new friends. I did find out from another mom that Will seems to have a crush. Eloise and Will were hugging last week and this week. Those two were the only ones not crying at some point, so they could of just been huddling for safety in a sea of tears. :)

Here is the terrible picture that I snapped today with my iPhone by putting it around the corner, spy-style, so Will would not see me!! I suspect that the little girl in the pink is the infamous Eloise. 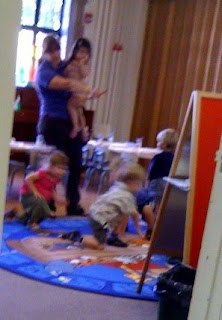 I promise to try to post more often now that I am in the swing of things at school and home.

Email ThisBlogThis!Share to TwitterShare to FacebookShare to Pinterest
Labels: Nursery School, Paul, Will

Carol
Baltimore, Maryland, United States
Living in the big city, raising a toddler and pregnant with a second. I am trying to have it all but find that I just don't have the follow through all the time. My husband, Paul, and I are raising two dogs and two children to be socially and environmentally aware. The second child should arrive somewhere around November 8, 2010. I will try to be honest at everything I attempt. I am sure that there will be gaps in postings as I am working full-time and raising rugrats. I'm sure I will be eating my words as I account the Underwoods in real time!